Computer repair guys love Emachines, because they’re cheap and have just enough memory to get the job done.  Emachine computers are built for value and to compete in the lowest price point range for desktop computers or laptops.  Because of this, the volume of Emachine Computer Repair San Antonio has seen in the experience of ASAP computer services is quite high. Call 210-497-1424 to speak with someone at Asap Computer Services now or Contact Us..

This could also be due to the high volume of Emachines sold relative to other computers, because of their fantastic price point for their desktop computers and laptop computers.  Emachines was purchased by Gateway computers who in turn was acquired by Acer in early 2007.  Emachine computers are still sold with the Emachine Brand under the Acer computer corporations umbrella.

At the height of Emachine computers glory they produced 1to 2 million computers per year and had 135 employees.  All in all Emachines are great computers particularly for entry-level computer users.  Emachines is famous for their four hundred dollar, PC with a decent CPU, monitor, printer, keyboard and mouse, all for under $400.

Again Emachines was acquired by Gateway computers, who in turn was acquired by Acer computers. If you need your image in computer fixed give us a call at ASAP computer services.  We’d be happy to help fix your Emachine computer and have tons of experience working with Emachines.

E-machines is pretty much an orphan now, and only found in junk heaps, much like this. 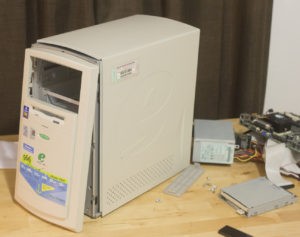