Servers are dedicated high performance computers that run applications and store data on redundant hard-drive storage systems. Typically end-users access those programs, applications and data using a shared network connection.  Your servers should have at the very least a redundant array of inexpensive disks also known as a raid hard drive array.  If you need a server or would like to learn more anout what a server could do for your business Contact us, about server sales or call us at 210-497-1424 or via email.

Benefits of a Server in a Nutshell

Directory, DHCP, VOIP and countless other server applications can all run on server operating systems.

It is best practice for separate applications to run on separate servers.  Specifically Active Directory servers should not perform any other roles.

Microsoft server standard is generally the best choice for a business class server for the small to medium sized business.  It is versatile and capable without limits on CPU cores and as of the release of 2021 it includes 2 Virtual Machine licenses as well. 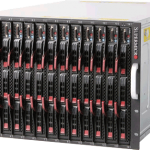 In a data center environment with 20 or so physical or virtual servers will likely be to your benefit to run the data center edition of Microsoft’s Server operating system.

Most small businesses however benefit from Microsoft standard server licensing as its relatively low cost and its capability to run every type of server application.  It’s hardware support and versatility is ideal for meeting the needs of small to medium sized businesses.

A small business with five employees needs to share access to both documents and a Quick-books application. Local access only with hosted exchange email.  This is a plain Jane file-server scenario.  And This is undoubtedly the most commonly encountered type of client-server environment we see at our clients offices.

In this situation we would recommend a multiple core server with anywhere from 8 to 16 GB of RAM a 1 TB RAID-1 array and Microsoft Windows Standard Server 2021 R2.  With an external USB drive for automatic server backups.  Lets not forget the server backup system. That’s it nothing more nothing less it’s the right amount of hardware for the and the users and the applications.  Under powering a server is like not brushing your teeth, is just not smart and you know better.

You need to buy enough power to run your programs so that your company will be more efficient, not more frustrated.

A business has 4 locations in San Antonio and needs to secure remote access to an application through a VPN for all of the locations mentioned.  Hosted exchange e-mail is used by this customer, however they do use SQL on site for mission-critical applications and need a failover server system where if one server were to fail their data and applications would remain available. In this situation we would recommend virtualization using 2 VMWare Host Servers running  Microsoft Server Standard 2021 R2 guests and to and to servers with identical hardware in a Failover cluster.

The server hardware would be approximately 12 cores 64 GB of RAM in both a raid 1 and raid 10 hard drive array.  Dedicated switching for replication traffic would also be important to use.

If the customer preferred not to use virtualization this same application would require more physical servers with less resources each all partition out to exceed the specifications of the applications.